Monday February 8, marked the Chinese lunar new year, an event celebrated by Chinese all over the world. Hundreds of millions of Chinese travel across the globe to reunite with families (In China, there is even a specific name for this travel season, Chunyun, which describes the extremely high traffic load around this time of year), to participate in what has been called the largest annual human migration in the world. And while there are slight differences in the zodiac, this same lunar calendar cycle is also shared by Vietnamese, Tibetans, Koreans, and Mongolian peoples.

[You can read more about the Chinese zodiac here]

Lunar calendars — that is, any calendar based on the cycles of the moon — trace back millennia to the Ancient Chinese, Greeks, Babylonians, and Jews. In fact, there are many cultures around the world today, such as the Islamic Hijri Qamari Calendar, Chinese Calendar, Hebrew Calendar, and Hindu Calendar, that still mark their calendars by the moon, and each follows a different lunar phase for determining the start of their annual cycle. There are also many who use the Gregorian calendar for everyday use but use the lunar calendar to determine holidays and festive occasions.

There has been some discussion around what to call this holiday, as mentioned already it is not just Chinese people who celebrate Lunar New Year on this date, or follow the Chinese calendar. Therefore, in an effort to remain accurately inclusive, I prefer the phrase “Chinese Lunar New Year” as a way of referring to the calendar being followed, and “Chinese New Year” to talk about the festivities and celebrations specific to Chinese people during the new year.

There is huge variability in practices, customs, and food (dear heavens the food) across cultures who commemorate the Chinese Lunar New Year, but at the simplest level it is a celebration of ushering in new beginnings, and being together with family and friends. Chinese New Year (CNY) isn’t just about one day, but weeks! Traditionally the festivities last until the 15th day of the new month, but celebration gatherings with friends can continue for the entire first month of the New Year. To me, Chinese New Year is about food (did I mention that already?), family, friends, and traditions that tie me back to ancestors whom I’ve never known but whose blood flows through my veins, and whose lives made mine possible. Guys, the food.

I love Chinese Lunar New Year and all the celebrations that go with it. I’m also a huge basketball fan(Lakers rule!) and I am extremely excited that the two are increasingly coming together in big ways.

Since 2012, the NBA has poured millions of dollars into the Chinese market and celebrating the Chinese New Year. Below is an overview of CNY celebrations in the NBA, and the corresponding actual date of the New Year and Chinese zodiac animal:

Cynics might say that the NBA’s investment into CNY is purely commercial. After all, China is the NBA’s biggest growing market, with over an estimated 300 million people playing basketball in the country (that’s the same number as the population of the entire United States). This is in large part due to the NBA’s increasing investment and focus on the Chinese market, capitalizing on a sport that has been popular in China for over century, and was introduced to China by American missionaries just 4 years after it was first invented in Springfield, Massachusetts.

While it does seem like the state-side CNY celebrations lean a little more towards celebrating Chinese celebrations (the community-focused events like basketball giveaways and building basketball courts happen primarily in China), , it still means something to see part of your culture celebrated, to see Chinese words on an NBA jersey (and not some lame tattoo that makes no sense). 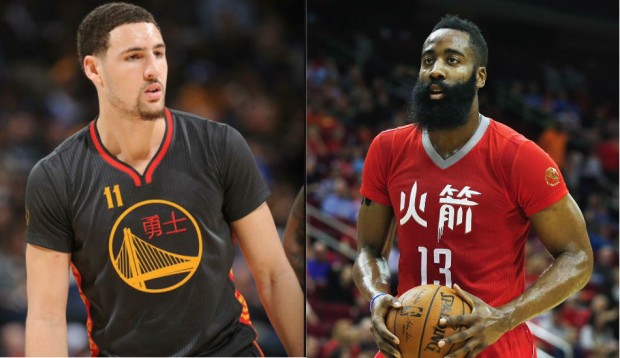 It’s exciting to see lion dances in an NBA arena, as it brings back memories of sitting around a TV while visiting relatives, watching the lion dance championships and eating pineapple tarts. (If you’ve never seen a real, championship-level lion dancing I strongly recommend you watch at least a few minutes, starting at around the 23-minute mark).

Basketball reminds me of family: growing up watching the Lakers, the annual ribbing I get to give my father regarding our in-family Bruins-Trojan rivalry, playing every day with friends during recess even though the principal of our all-girls’ school told us that basketball wasn’t a feminine sport (true story). Even the orange ball reminds me of the oranges that we would present to hosts while visiting and stuff our faces with throughout the CNY season! Seeing the celebrations of CLNY during basketball games during this time of year lets me feel close to my family in special ways even though we’re celebrating from different continents and time zones.

I would love to see more Asian players in the NBA, more inclusion of Chinese culture beyond the parts with splashy commercial appeal, and a more nuanced celebration of CLNY and the various other cultures that celebrate Lunar New Year during the same time. As an Asian American, that would be the right step towards inclusion and recognizing that the Asian population in the United States is NOT homogenous, has a rich basketball history and create a space in the NBA (which is after all a national league so shouldn’t it represent all of us in America?) that recognizes Asian culture here in the US, not just where there is profit to be made in China.

Let’s usher in the New Year!