The Halloween season. That time of year when children and adults alike dress up as ghosts and witches, celebrities and household items. Tell me boys and girls and gender nonconforming children, do you want to hear a Halloween riddle?

What do you get when you combine a domestic violence joke with black face?

Anyone? Well, I’ll tell you. A perfect storm of what-the-fuckery, that’s what. 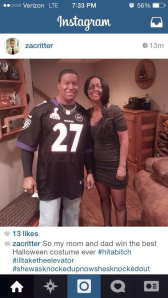 These costumes are, of course, making fun of NFL star Ray Rice who was recently suspended after footage surfaced of him violently beating his wife in an elevator. Domestic violence is a serious issue that affects 1 in 4 women in her lifetime. It is no laughing matter. I don’t think anyone said it better than Janae Rice herself, who tweeted, “It’s sad, that my suffering amuses others.”

As for blackface, well, it seems to be as much a part of Halloween as vampire fangs and fake blood at this point. Year after year after year we see white people painting their faces in shades of black and brown, with no regard for the way it affects people of color.

Listen, if you want to dress up as a famous black person, there is a right and a wrong way to go about it. Here’s how it should be done:

This couple pulled off a flawless(!) rendition of Jay Z and Beyonce from their On The Run tour. There’s no mistaking who they are supposed to be, they look great, and, best of all, they refrained from using blackface. Well done!