When Renisha McBride stepped on to the porch of Paul Wafer’s Dearborn Heights home, the end result shouldn’t have been a point blank gunshot blast to the face. When Jonathan Ferrell ran towards the police for help after a car accident, officer Randall Kerrick’s response shouldn’t have been to fire twelve shots at Ferrell, hitting him ten times.

But in both instances, shots were fired, innocent black people were killed, and we’re all left wondering why this keeps happening.

Joshua Correll is a psychologist at the University of Colorado. Correll has conducted numerous studies to uncover the insidious relationship between race and our willingness to pull the trigger.

Correll and his team took pictures of black and white men and photoshopped into their hands either a gun or one of several different innocuous items.  One at a time, the images would flash, and participants were required to either “shoot” or “hold-fire” depending on what was in the suspect’s hand. If you saw a gun, you should fire. If not, hold.

Participants were measured not only on their ability to correctly judge when to fire or not, but the computer program could also determine how quickly a subject submitted their response.

What did Correll find?

The untrained individual has less restraint: Overall, local residents were much more likely than trained officers to push the “shoot” button – men especially. Neither group of officers showed a greater preference for shooting as opposed to holding — their training allowed them to adequately assess the image before determining whether to shoot or to hold.

However, once race was factored in, the results changed significantly. When the subject was a white male, local residents actually had no greater preference for shooting over holding. Yet when the image was of a black man, residents overwhelmingly erred on the side of pulling the trigger. A similar pattern emerged with some of the police officers but not nearly to the extent of the Denver residents.

The benefit of the doubt comes with being white: Participant response speed depended largely on race. If the target was holding a gun, participants across all three groups were quicker to fire if the image was of a black man than if he was white. If the subject was holding an innocent item, participants more quickly pressed the ‘hold’ button if the target was white. In other words, when it comes to Blacks, in the heat of the moment, we’re quicker to shoot and slower to let our guard down even when we’re safe.

Response Time to Black and White Armed and Unarmed Targets 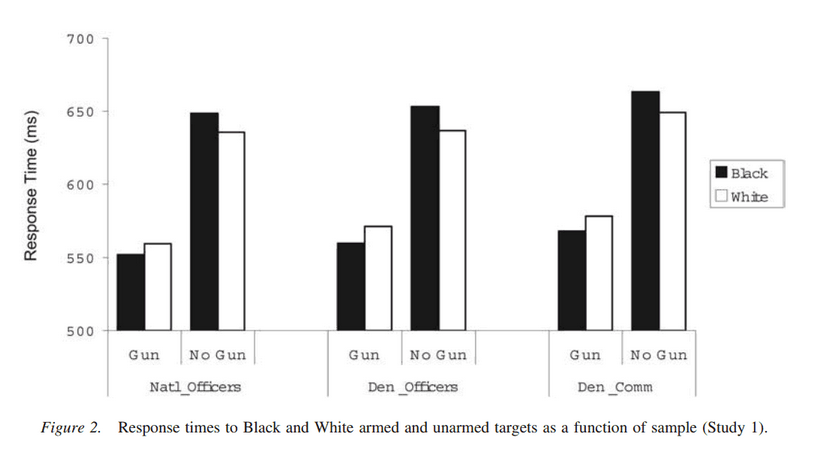 For officers, their environment played a role, but didn’t dictate outcomes: For police officers that patrolled areas with high crime rates and larger proportions of blacks or other minority groups, reaction times were even more biased. These cops exercised quicker reaction times for pulling the trigger and longer waits before deciding to hold. However, ultimately these officers had no greater likelihood of utilizing the shoot determination as they were the hold option.

Of course, experiments are no adequate substitute for the real thing. An image, no matter how well staged, will not evoke the exact same response as we would expect in reality. But here Correll provides a glimpse into what plays within us when charged with the decision to shoot or not to shoot.

We hear over and over that in the hands of good and responsible people, guns are near harmless. In most circumstances, only when warranted will the gun go off and only on those who deserve it.

The results of Correll’s work contradict this. Instead we see that in the hands of the average person the gun allows for a violent manifestation of prejudices and bias leaving large swaths of citizens as potential victims to the fears and misconceptions of their neighbors.